Since Memory Full is mainly a development oriented forum, it will be useful to list on this thread all the z80 useful resources you know.

[EN] Grimware (on WayBackmachine only, because the site is down for a while): a lot of documentation on hardware and software, but was only in progress when it stopped so still incomplete...

[EN] z80 Heaven: a lot of things and documentations. Everything is not reliable, but stay interesting because very complete!

Share your favorite z80 website (CPC oriented or not). For example, do you know interesting address related to ZX Spectrum or MSX coding?

As far as I know, there is a large russian ZX scene, so the interesting resources might be in russian :)

It's also good to learn by examples.

We could point to some source snippets, especially for beginners.
I plan to incorporate the best ones in Orgams disquette, with mum's permission, of course.

[EN] RASMlive: a good way to try & modify z80 live!
With a lot a existing sources. Tronic animations are funny!

Just found that today, it's awesome! Also this retro-something emulator with built-in assembler, debugger etc finally running on Linux. 2020 is the heavens for CPC cross-coders

About RASM-live: an easy way to set PAUSE on the emulation side would be nice (sometimes usefull to watch step by step an animation).

Another kind of resource: Disassembly of 6128 firmware ROM, properly commented. To find a particular vector, look up its canonical name (with spaces), e.g. « SCR HW ROLL » or « KL FIND COMMAND ».

I'll include it in next OrgaMs Release!

Great! The firmware jumpblock description is the neatest I've seen!

I first thought on including it as embedded help. Instead, since you can now open several source files, it's as good to load it in a dedicated "tab" (e.g. you may use CONTROL-f9 consistently for this file) and enjoy Orgams' navigation facilities. For instance, when seeing call ccc,nn, just hit CONTROL-ENTER to see what ccc refers to.

Did I just copied the timing from Quasar point net? No! That would have been neither accurate nor complete!
It's the result of hundreds minutes of work (you can imagine how much this represents in seconds) and years of trekking.
It's filled with tips and anecdotes about the biggest names in Z80 world.

You may also appreciate its companion source "Z80tests.o" which demonstrates said timing and flag behaviors.

It will become obsolete with Orgams "Fluffy Flags". In the meantime, enjoy. 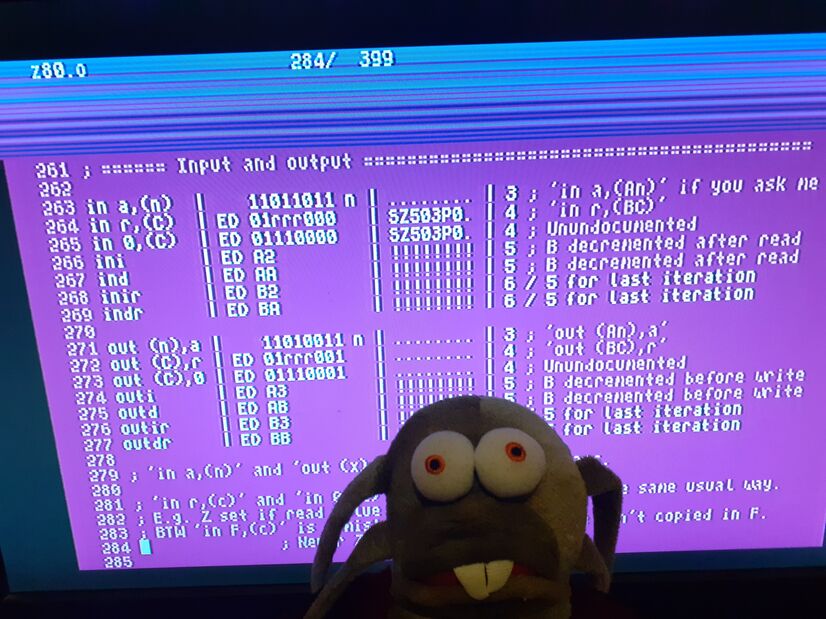 Really cool. Any chance you could post this hard work on the web? In a readable way, of course...

Yay for Madram!! Thank you for having done it!

The tip itself (INC HL, DEC BC, loop while BC in 8 NOPs and 5 bytes) is still valid:

Of course that's not the fastest way to do a 16 bits loop with HL increment, but it's the shortest and it's timewise-stable.